Today we met up with our new driver- a short older man named Oggie. He’s a delightful chap from Glasgow who has regaled the kids with stories, traditional folk tunes, and his thoughts on Unidentified Flying Objects. He’s a character to be sure, but we’re excited to share some time with him on the roads of Scotland as we head towards the Highlands.

We waved goodbye to our home on Prince’s Street, and headed on the A9 on the way out of Edinburgh. Our first stop was one that was suggested to Ms. South and I by Oggie. He took us to an overlook that housed three incredible bridges that crosses the Firth of Forth. Originally, this was the same pilgrimage track that took people from Edinburgh north to St. Andrews so that they could pray at the Cathedral in the ancient Kingdom of Fife.  The modern bridge today is still called Queen’s Ferry Crossing as a tribute to St. Margaret (we saw her chapel in Edinburgh) who was instrumental in bringing Christianity to Scotland. The three bridges span the crossing, one was built in the 1890s, one the in1960s and finally the modern Queen’s Ferry Crossing that was opened in the 2010’s. Together they form a delightful hub of activity carrying trains and people across the sea. We were grateful to Oggie for stopping and letting us take in these amazing bridges that span an incredible distance over the Firth of Forth.

After driving a bit longer, we arrived at our hotel for the evening- the Drumoig Golf Hotel. We hadn’t realized that this hotel would be so accommodating and that it would have its own small golf course. A fitting residence for our evening in St. Andrews! We left the hotel after checking-in, and had a more leisurely day that began with a walk up to St. Andrews Castle. Before we made it up, we were able to catch a glimpse of the little cafe that William and Kate had their first date in- the royalists amongst us were happy to have seen this important place in the history of the young couples love story. A bit further up we came to St. Andrews Castle. This fortification dates from the fourteenth century, but I was happy to share some of my favorite stories from this castle. First of all, the Presbyterian revolutionaries took control of this castle during the Reformation in the 1560s. John Knox and others raided the castle after the Catholic Bishop burned George Wishart (a Protestant preacher) alive outside of the castle walls as a way of “halting the heresy”. We stopped and waited a moment at the “GW” emblem on the ground of the road which marks the place that Wishart was executed. We explored the ramparts, grabbed some photos, and some of us even climbed into the mine that helps us better to realize the struggle involved in these early modern sieges. The royalist and Catholic forces outside of the fort decided to mine deep under the walls of St. Andrews Castle in hopes of planting a large amount of explosives and bringing down the wall. Realizing the ruse, Protestants inside decided that they would mine in an effort to stop them. What followed was a game of cat and mouse where both sides dug towards each other until the two mine shafts met and there was a small battle underground!

After having our fill of St. Andrews Castle, and having a peek down their oubliette (or bottle dungeon), we decided to walk down to the beach. The water was lovely and many of us collected shells, sea glass, and rocks, as we enjoyed the refreshing breeze and sun. After getting re-energized, we headed back up the hill to the ruined Cathedral of St. Andrews. While the ruins are spectacular, it is hard to realize just how important this site was in early Scottish history based on its present condition. Our driver, Oggie, repeatedly lambasted John Knox for his treatment of these historic buildings. Knox was part of the group that looked to destroy this Catholic Cathedral, even letting many of the local peasants steal the remaining brick from the Cathedral so that they could build their own homes. While he may have had a theological point, posterity has lost a beautiful building.  All animosities aside, the Cathedral was once the largest Catholic Church in Scotland, and it still has the remnants of St. Rule’s Tower. This thirty-three meter tower gave some of our students an opportunity to climb up to the top and take in the views of the North Sea. I was too scared to climb up, and was too scared to go too deeply into the mine shaft. Those experiences are reserved for the kids who are much much braver!

We ended the day by going and snapping some photos of the Old Golf Course at St. Andrews, including a photo of Lexi on the Swilkan Bridge. The history of golf in Scotland goes back to the late medieval period, but my favorite story was the early Stuart kings made all golf and golf related activities, including hitting pebbles with a stick, illegal! The thought was that he needed to outlaw all golf because all the men of Scotland were spending too much time playing a game, and not enough time practicing their archery and sword fighting skills. Little did he know that many of us still play golf today, and less of us have ever used a sword or bow. The walking was much more manageable today, but we were happy to have a more leisurely today still packed with plenty of sites and history. You guys continue to be an inspiration with your upbeat and fun attitudes. Ms. South and I are happy to be on this journey with all of you! 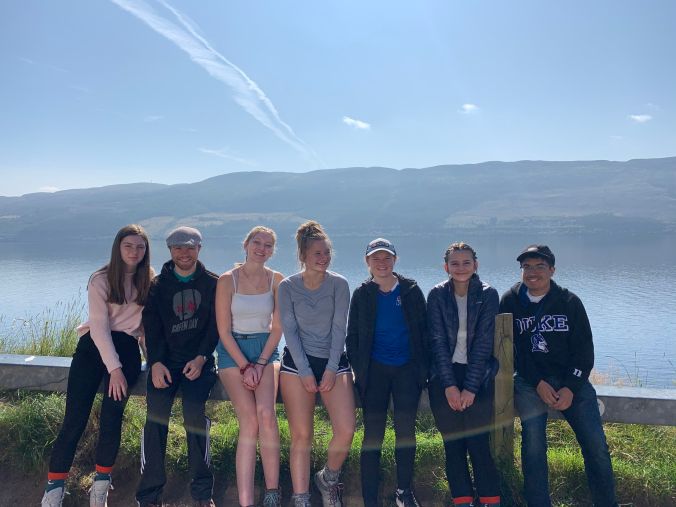