Arriving in Himeji aboard the Shinkansen, we rented a fleet of bicycles and rode our way to Himeji Castle. The bike ride was rather eventful, as we followed a route that encircled the Castle grounds, on which both Trevor and Adah nearly killed a pair of elderly people. Adah was successful in landing a blow on her intended target, while Trevor missed by a hair and crashed into the sidewalk. 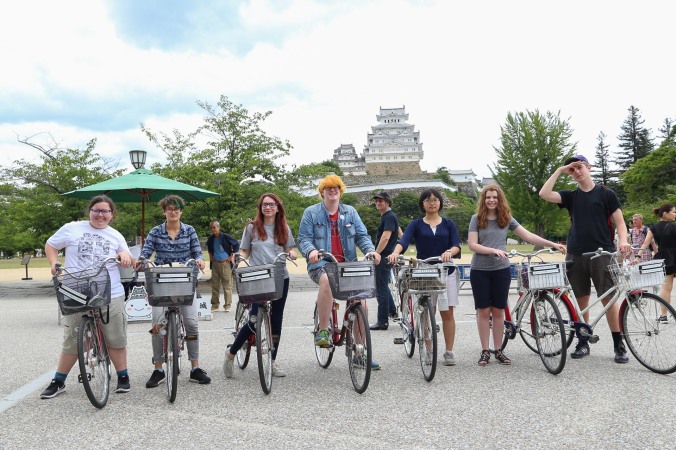 The Himeji Castle excursion was a step back in time to the feudal era of Japan’s rich past. Several trees on the castle grounds were centuries old, to place it into perspective. The biggest impact it probably had on the group, though, was aching calves, due to the slope of the stairs. After visiting the castle, the caravan of bicycling proceeded on to a roundabout route to the train station. The bike ride was overall enjoyable. Justin wants to include that he (and Mr. Waterhouse) did some “sick bmx-ing” which included “bunny-hops, mostly”. We then continued on to Kyoto.

The Air bnb where we stayed in in Kyoto was cozy and modern, but very steep. The stairs, nearly vertical in their steepness, posed an existential threat to any wearing socks indoors, regardless of direction of progression. The girls, and Dreeg, stayed on the second floor of the three floors, next to the wifi and kitchen, while Justin and Trevor stayed in the attic, next to the industrial washing machine and showers where, as a reliable source states, they were “required to perform rigorous menial labor in the washing of clothing and pumping of water for measly bread rations, and the occasional droplet of clean water.” In all actuality, Justin and Trevor just had bad wifi, and actually made everyone else late most days.

The following day, we went to the Fushimi Inari shrine and passed through hundreds of the vermilion torii (gates) leading up to the main shrine at the top of the path, and saw the gardens and fountains and all.

Following the visit there, we took the bus to the Hall of the Lotus King, a temple which holds over 1000 Golden Kannon statues, as well as 28 stone guardian deity statues. The temple’s policy of prohibiting photography, as well as the general atmosphere of the place, truly imparted a sense of reverence and tranquility. After that, we went to the Kiyomizu-dera temple, a temple aged over 1200 years, and saw the overlook and gardens, which provided a stunning and singular view of the city and the wildlife of Japan’s forests. Somewhat. The gardens at this temple also were quite peaceful. At some point during the day, we went and got some ice cream. It was great. 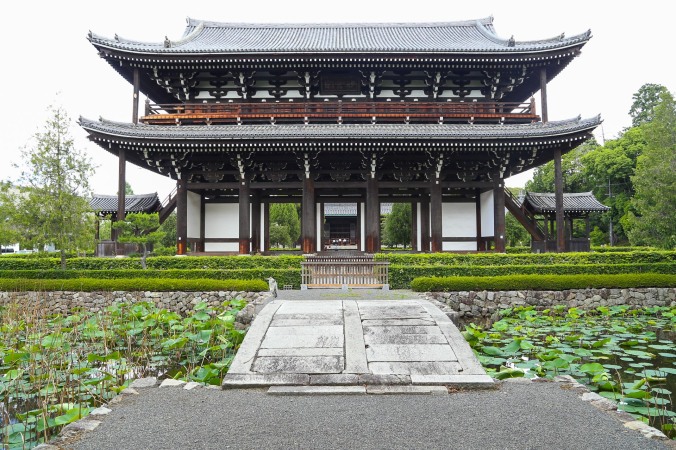 The second day in Kyoto, we had an extravagant experience that started off with a wholesome and nutritious breakfast at McDonalds. We then traversed our way over towards the notorious bamboo forest, Japan’s most famous rock garden, and Kinkakuji (a building you see in all the travel books and post cards for Japan. Both of which were stupefying views, and brought upon us a tranquil feeling. Either that, or that we were exhausted from all of the walking.

We also hiked up a gargantuan hill, which resulted with the sweet reward of seeing, and yes, feeding monkeys. Some fed the monkeys peanuts, others apple slices, but all in all, it was a enjoyable event.

The best part was the monkeys fighting though, it was entertaining watching them run around screeching at each other. Lilly also got pounced on by a monkey and hurled her backpack down the hill, which was luckily retrieved by one of our group members.

Dinner that day was quite eventful, as we had Thai cuisine. It was all very scrumptious, but Trevor had decided to treat himself to an entire dehydrated chili pepper. He then proceeded to hurl up what seemed to be a huge web of mucus that had been making him cough ever since before the beginning of the trip. It was quite repulsing. Anyways, sorry for those who are eating while reading this. Don’t imagine it too much.

The last day in Kyoto, we had various things bought from a store for breakfast. It wasn’t exactly formal, but was still as good. Just some bread, bananas, etc. We packed all of our stuff, got some coin lockers, and went off to Nara. We saw a huge Buddha statue and fed some deer that distracted Trevor long enough for the rest of our group to leave him behind and board a bus back to the station. 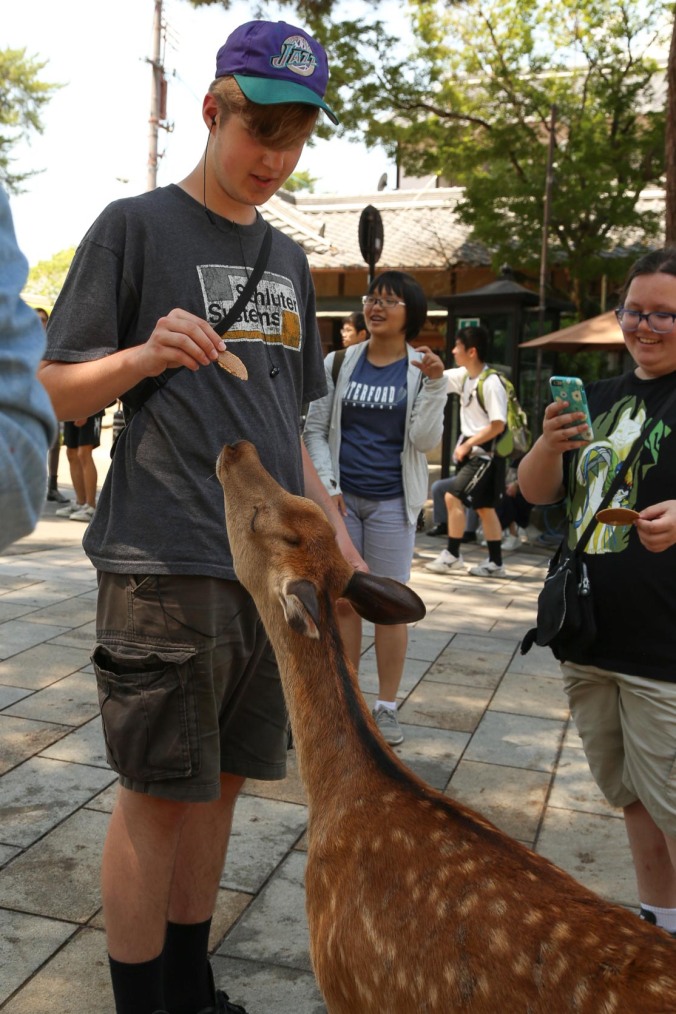 Thankfully, Justin noticed that he had gone missing, and we sent out our search and rescue squad to retrieve him. (The search and rescue squad was really just Mr. Wade and a slight bit of concern for Trevor) Trevor was thankfully recovered and escorted to the station, and both Trevor and Mr. Wade were thanked graciously with various options of meals. We then boarded a train, and a couple transfers to our next stop, Koya-san.

Mount Koya was quite an experience just to get to. We had to board a cable car that went up a track on a very steep hill. The inside was oddly shaped, as to compensate for the steepness of the hill. The inside was shaped like stair steps, which was quite a contrast to the familiar flat inside of a train. Arriving to our destination, we ventured through the vast hallways, twists, turns, whatever it had to throw at us. Thankfully we had a gracious monk show us around and lead us to our rooms. It’s beautiful up here. The birds chirping, the peaceful aura around the place, it all evokes a form of tranquility. We later ventured towards a grave site that was very peaceful. Just by stopping for a second and listening closely, you could literally hear a pin drop. It was incredibly quite.

We also walked around and saw the Mausoleum of Kukāi, which was massive. The entirety of the grave site was quite peaceful. We walked back, but some were unsure of where the place was. Thankfully, we had Mr. Wade to point us in the right direction. Dinner was a vegetarian meal which was quite enjoyable. Some new things for us to try, like the notorious pickled plum. Well, new if you’re not Sakiko.

The second day on Mount Koya, we took a day trip to Kongōbu-ji, where we learned about the story of Kukāi, the founder of Shingon Buddhism and first settler of Mt. Koya. There, we also saw a rock garden, the largest in Japan, and many other artistic wonders. After this, we headed to another temple, with new wonders. If any of you readers have seen the video of the group pushing a wheel, that was taken at the other temple here in Koyasan. Following that, we found a playground meant for children far younger than us and made use of it, ironically, of course. From there, we went on to take a small hike up to a shrine, which was very nice, but unfortunately destroyed Adah’s ankles, Dreeg’s knees, and made the rest of us really sorry for them. From there, we’ve been granted a great amount of free time, which we have used to get some downtime to just chill. Tomorrow we head into Tokyo, and that is bound to be exciting! We all look forward to hearing from you readers as we go onwards on this trip. Please keep an eye out for further posts from us.

One thought on “Kyoto to Koya-san”