Another beautiful day in sunny Saint Petersburg. We lucked out with the weather these past few days……blue skies and warm weather. Olga, our tour guide says that they have a saying here about the weather – they have 9 months of “expectation” and 3 months of “disappointment”…. 🙂 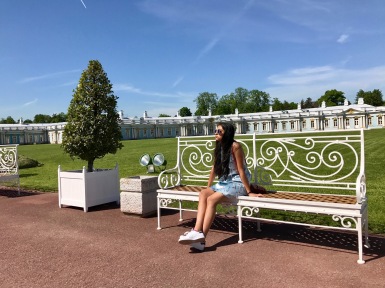 Well, we certainly have been lucky and blessed with beautiful weather.

On our way to Catherine’s Palace we were stopped by the police. They checked our paperwork and looked at our seat map and called out Stella’s name. He wanted to check to make sure that we were all sitting in the right seats. It was a hassle, but the policeman was pretty nice about it. He asked us where we were from…..he said Michigan??? We said no – Utah and he had this blank look on his face. I don’t think he’s ever heard of Utah…..

Catherine’s Palace was beautiful. It’s a palace located almost an hour south of St. Petersburg. It was the summer residence of the Russian tsars. It was spectacular. It was an easy walking tour and it was nice because it wasn’t as crowded as the Hermitage. It was good to be able to see without having to dodge people. 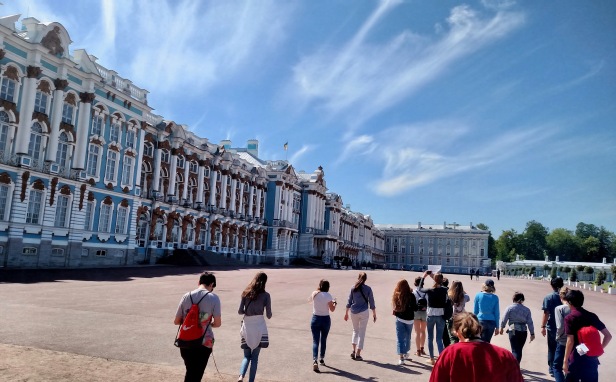 For lunch everyone had a chance to go where they would like.  A group of us found this cute restaurant right near the palace. It had the best mushroom soup and Russian pancake with chicken and mushroom. Many students also had beef stroganoff and chicken cutlets. Yummy food.

I used a paid toilet for the first time here in Russia. It was an adventure trying to figure out how it all works. We had to get “tokens” and get swiped in with a key card. It was very interesting.

They were so sweet and clapped and cheered like none other. My students played really well today. It was so good for them to be out and about today sightseeing, getting lunch, buying souvenirs and then turning around and playing a concert for over an hour. I was so proud of them. They adopted to a smaller stage and quickly adapted their balance and sound. The hall of course didn’t have the same acoustics as the Glinka Capella, but it was still good and everyone LOVED the concert. Today, I wished I had a camera on stage, just so I could take a picture of all these happy people enjoying the beautiful music. The seniors were tapping their feet, dancing, conducting etc…. When we played Tap Roots some of the audience members stood up so they could get a closer look at the “spoons”. They loved it!!! I spoke to several people after the concert. One woman in particular was very sweet. She spoke a bit of English and she said that she enjoyed the concert and was so happy to hear American and Russian music together in one concert. She said that it made her heart warm and that it gave her hope for the future. She was lovely. I’m so proud of how my students played today. They were awesome! 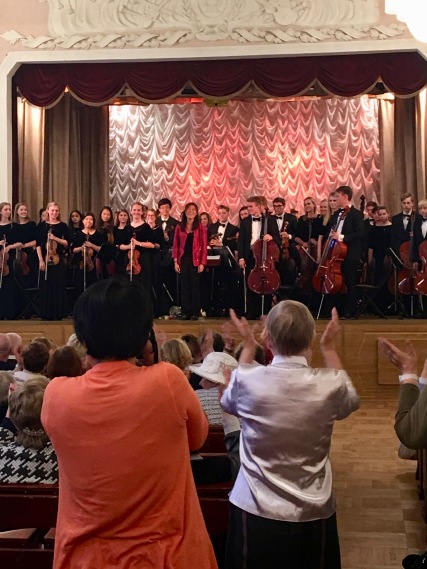 From the concert, we went to dinner – it was delicious. We had salad, borscht, a beef stew and ice cream. Don’t worry – for the vegetarians they always get separate meals so there is no worry.

Our final activity was the canal tour. It was excellent – now I know why Saint Petersburg is called the Venice of the North! I highly recommend this tour. It was a great way to end our stay here. It gave us a different perspective of the city from the water. We got back to the hotel around 10:30pm. Another 12 hour day… Your children will sleep so well when they get home!

We all love Saint Petersburg. We’re a little sad to leave this wonderful city.

Tomorrow we head to our final destination- Moscow!

Processed with VSCO with c1 preset

Processed with VSCO with f2 preset